No ‘Sleepless in Baltimore’ 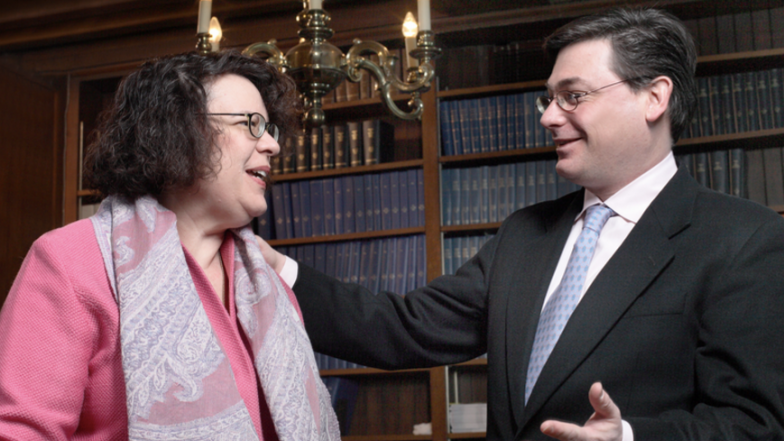 News from the Johns Hopkins Department of Psychiatry and Behavioral Sciences

When Jill Leukhardt was an executive in a booming technology business a few years back, her bipolar II illness—which she didn’t know she had—dovetailed nicely with her job. “I was one of those determined to have it all,” she says. “I’d work until 2 or 3 a.m. because we needed the output. I loved it. And I’d routinely take the red-eye home from the West Coast to catch my daughter before she went to preschool.”

Seven years ago, however, the disease caught up with her, and Leukhardt became seriously ill, first with depression. She left her job and sought help from both a psychiatrist and a Hopkins-trained psychologist skilled in psychotherapy. Gradually, life fell back into place. But after a year, her therapist spotted a disturbing trend, and, concerned, Leukhardt made her way to Dr. Smith, a clinician and research director for Hopkins’ Behavioral Sleep Medicine Program. Abnormal sleep, part of the fabric of Leukhardt’s bipolar disorder, had made hers a complex but not uncommon case.

“I’m a severe night owl,” she says. “I tend to push sleep later and later.” More than once the young woman has slept all day and lit up the house at night.

“For someone with a light-sensitive circadian dimension to her illness, that’s the worst situation for her,” says psychologist Smith. “Moreover, in Jill’s case, sleep problems are a sentinel for full-blown depression.”

Psychiatry is just realizing sleep’s role in mental disease, says Smith—not only bipolar disorder but depression, generalized anxiety, eating disorders, SAD and alcoholism, for example—with each apparently warping REM or other sleep markers in characteristic ways. “Altered sleep isn’t just another symptom; it’s an integral part of the disease and a window into its neurobiology.” Consider the fact, he says, that briefly depriving severely depressed patients of sleep can dramatically brighten mood. “It’s as good, temporarily, as the best antidepressant, and it shows sleep’s systemic role.”

But that word hasn’t gotten out, Smith explains, nor has an appreciation of behavioral sleep therapy—a focus of a new Hopkins program.

Part of Smith’s research explores behavioral therapy as it’s shaped for insomnia. It begins with evaluation: Smith sought the cause of Leukhardt’s problem via interviews, sleep diaries and monitoring. Was it her poor sleep habits? A faulty biological clock? A state of heightened arousal? With the latter, there’s a suggestion of a “broken homeostat,” a flaw in the brain’s input to hypothalamic sleep and arousal centers or within the centers themselves. Normal balance between the two is upset, tilting to the arousal side.

Then EEG studies are sometimes pulled in, Smith says, especially newer quantitative methods that point out specific brainwave patterns. When some patients come with unremarkable sleep studies, for example, digging into their “sleep microstructure” reveals subtle swells in brain activity. “My mind still races though I’m half asleep,” they’ll say.

As for Leukhardt, behavioral therapy combines light-box use, sleep restriction—she was told roughly when to go to bed and when to wake up—and improving sleep hygiene. If she’s sleepless more than 10 minutes, for example, she leaves the bed to read in a low light until drowsy.

These approaches undeniably show that insomnia is neurobehavioral, Smith says. So do his SPECT images—they give visual proof that therapy partly corrects an insomnia-sparked drop in cerebral blood flow.

Because therapy poses some risk for Leukhardt, she sees Smith regularly for fine-tuning. Both sleep restriction and light therapy can trigger manic episodes, so her use is judicious. Smith can see their value, though, as does she: “This definitely makes a difference. My sleep is much more stable. Is it a coincidence that my mood is too? I doubt it.”