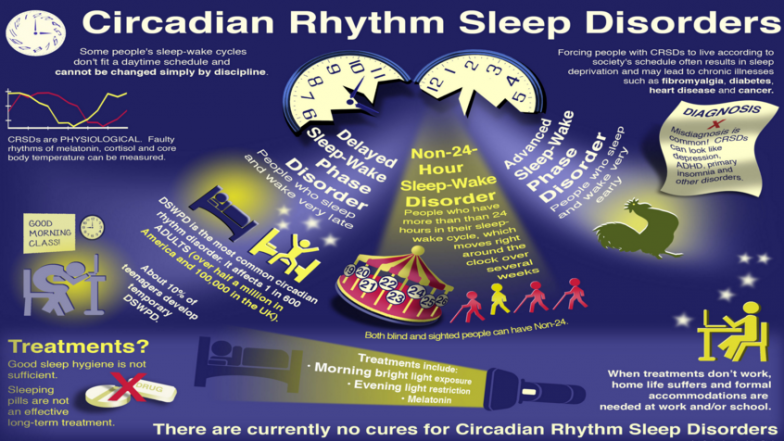 They are generally able to get enough sleep if allowed to sleep and wake at the times dictated by their “body clocks”. The quality of their sleep is usually normal unless they also have another sleep disorder.

Starting point for this Overview is this Wikipedia entry as of Aug. 25, 2016

Humans, like most living organisms, have various biological rhythms. Circadian rhythms, often referred to as the body clock or the biological clock, control processes that re-occur daily, e.g. body temperature,alertness, and hormone secretion as well as sleep timing. Due to the circadian clock, sleepiness does not continuously increase throughout the day; a person’s desire and ability to fall asleep is influenced both by the length of time since the person woke from an adequate sleep and by internal circadian rhythms. Thus, a person’s body is ready for sleep and for wakefulness at relatively specific times of the day.

Sleep researcher Yaron Dagan states that “[t]hese disorders can lead to harmful psychological and functional difficulties and are often misdiagnosed and incorrectly treated due to the fact that doctors are unaware of their existence”.[1]

One of these disorders is extrinsic (from Latin extrinsecus, from without, on the outside) or circumstantial:

Four of them are intrinsic (from Latin intrinsecus, on the inside, inwardly), “built-in”: 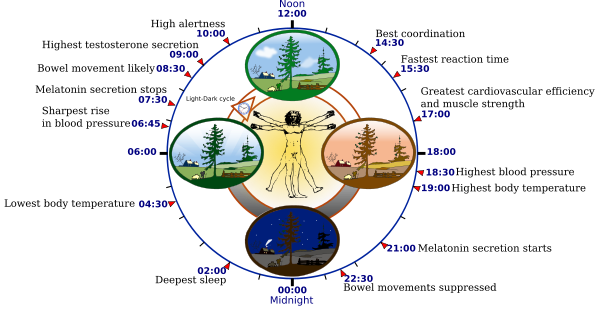 Typical features of a normal circadian rhythm, including a bedtime of 22:00.
From Wikipedia entry

Researchers have placed volunteers in caves or special apartments for several weeks without clocks or other time cues. Without time cues, the volunteers tended to go to bed an hour later and to get up about an hour later each day. These experiments appeared to demonstrate that the “free-running” circadian rhythm in humans was about 25 hours long. However, these volunteers were allowed to control artificial lighting and the light in the evening caused a phase delay. More recent research shows that adults of all ages free-run at an average of 24 hours and 11 minutes. To maintain a 24-hour day/night cycle, the biological clock needs regular environmental time cues or zeitgebers, e.g., sunrise, sunset, and daily routine. Time cues keep the normal human circadian clock aligned with the rest of the world.[3]

Non-24-hour sleep–wake disorder and other persistent circadian rhythm sleep disorders are believed to be caused by an inadequate ability to reset the sleep/wake cycle in response to environmental time cues. These individuals’ circadian clocks might have an unusually long cycle, and/or might not be sensitive enough to time cues. People with DSPD (Delayed sleep phase disorder), more common than Non-24, do entrain to nature’s 24 hours, but are unable to sleep and awaken at socially preferred times, sleeping instead, for example, from 4 a.m. to noon. According to doctors Cataletto and Hertz at WebMD, “Altered or disrupted sensitivity to zeitgebers is probably the most common cause of circadian rhythm disorder.”[4]

Circadian rhythm abnormalities are also extremely commonly co-morbid with ADHD, especially in the form of sleep initiation insomnia. These have been genetically linked by findings of polymorphism in genes in common between those apparently involved in ADHD and those involved in thecircadian rhythm[5][6] and a high proportion of DSPD among those with ADHD,[7][8] however no specific or further cause-effect relationship has been proven.

As of October 1, 2005, the diagnostic codes for circadian rhythm sleep disorders were changed from the 307-group to the 327-group in the Diagnostic and Statistical Manual of Mental Disorders, Fourth Edition, Text Revision (DSM-IV-TR). The DSM updated to agree with the International Classification of Diseases (ICD-9). The new codes reflect the moving of these disorders from the Mental Disorders section to the Neurological section in the ICD.[9]